Dubrovnik was never really on my travel wish list.  I vaguely knew about it from reports of  the war in the early 1990s.  Then my BF met a customer from Croatia whose stories peaked his interest.  He did some web research, showed me photos of the Dalmatian coast, and we added this gem to our fall European itinerary. It was a marvel — a modern, thriving city with a deep sense of its past. 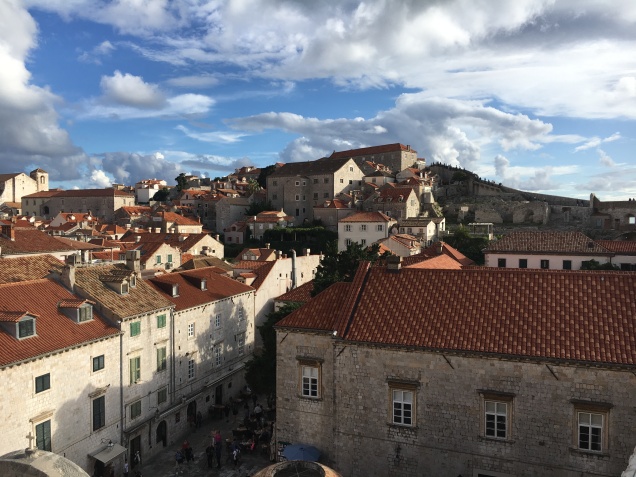 The expected: scenery, history, friendly people, good food
From our first step outside our apartment, we encountered a “postcard” moment at every turn. The Old Town, heavily bombed and restored after the war, still has many wonders within its walls. Enter through a medieval gate and you are transported to another time. You can wander the street, eat, shop, and take in the history.
Some buildings date back to the 11th century and include Franciscan and Dominican monasteries, several Baroque-style churches, and ancient palaces (old Town Hall and the Customs House). We refilled our water bottles at the Great Onofrio Fountain, a large cistern built in 1438 with spigots all around, still providing clean water.

The walk around the city walls offers the most dramatic views should not be missed. If you are a Game of Thrones fan, lots of the settings will look familiar. 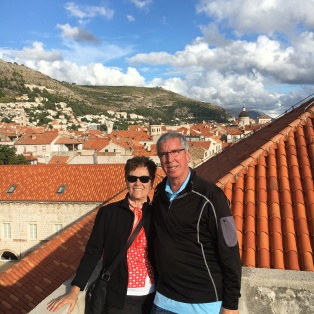 Posing on the wall 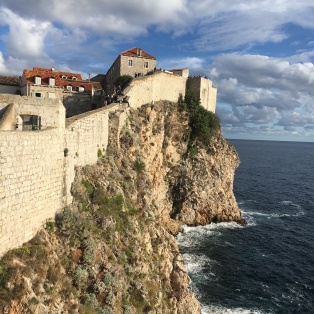 While you do not have to ride the cable car to see a sweeping panorama (or climb the clock tower), we did anyway.  It’s always a novelty for me to do this when I am NOT on a snowy ski slope.  Beware: other than fear of heights, you are chancing visual overload!

The city is rife with coffee shops and restaurants. Of course we ate lots of fresh seafood, as expected with so much coastline, and we ate well. Italian food, especially pizza, was easy to find. Our favorite meal was at the Above 5 rooftop restaurant inside the city walls and my favorite appetizer was the Dalmatian pogača made with homemade brioche, tomato confit, garlic cream, anchovies, parsley oil, caramelized onions. 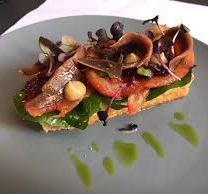 The unexpected: English fluency, water polo, US geography, and more
We knew that English was spoken in Croatia but were surprised at how fluent and comfortable people were with OUR language.  As someone who has struggled with Italian for many years, I am always awed and appreciative of this.

Did you know that Croatians are proudly the world champs in water polo?  Neither did we.  We were concerned when we saw a man swimming a long distance around the Old City and, we thought, struggling while doing it. Our guide assured us that everyone in Dubrovnik is a very good swimmer and not to worry. That’s a pretty broad statement and it might be true. (The swimmer did make it to safety.)

When we told Croatians that we were from North Carolina, we did not really expect them to know where it was.  Wrong.  The first remark from the men was often “Number 23”!  It seems that Michael Jordan of UNC basketball fame put North Carolina on the map for Eastern Europeans and Nikes on lots of their feet.

Despite being close to the historic Old City our apartment was surprisingly ultra-modern, with sleek styling and a large hot tub overlooking a bay.  We joked that it was designed by the two wild and crazy guys from SNL, as it was more equipped for bachelor-style romantic entertaining than for family life.

And, when we wanted to venture out at night we opened our Uber app and were driven around the city. Now, that was a real surprise.

My advice: Put Dubrovnik on YOUR travel wish list.