In the 1980s, Wendy’s famous ad campaign asked “Where’s the beef?” In Argentina, they have plenty of beef, lots and lots of beef, as well as pork and lamb. The question to ask instead is “Where’s the veggies?”

When eating out in Buenos Aires, finding a vegetable other than salad (arugula, shredded carrots, avocado, and tomatoes) was a real challenge. A typical menu would have several types of grilled carne (beef): Bife de Chorizo, Ojo de Bife, Bife Angosto, Bife de Costilla. I never did get them straight. If you didn’t specify jugoso (juicy), it was always done medium-well. Most portions are generous, big enough to share. It’s a matter of national pride. You’d often see the big parrillas (grills) with men cooking large amounts of meat showcased on the street or in an open window. Their local rock stars! 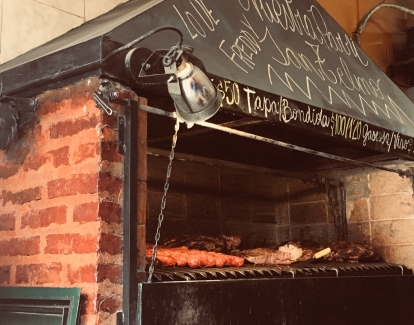 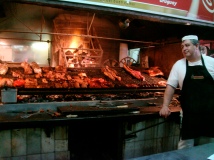 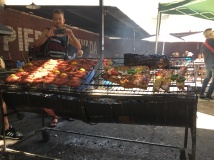 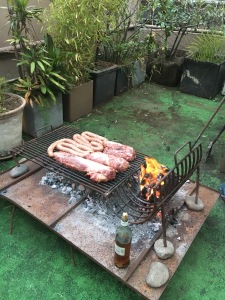 I was twice treated to an Argentinian asado, the local form of a barbecue. One was on the roof our our co-living space and the other was at my Spanish teacher’s house, both for 10 or more people. The menu was the same, different cuts of beef deliciously cooked over a wood fire, basted with a flavored water, then cut into pieces, and served on bread. That was it.

The beauty was its simplicity. All finger food, no forks, knives, or dishes. No need to sit at a table. A few people brought packaged cookies that we passed around for dessert.

Protein abounds. I found out that Milanesa was a thin slice of meat, breaded and fried — like veal parmesan without the sauce and cheese, or maybe their version chicken-fried steak? Lomo was a Philly cheese steak without the trimmings. Most menus included some fish, a seemly reluctant salmon or tuna. To mix it up, the trending hamburgueserías, feature all kinds of burgers and creative toppings. The only side dish (if any) with all of these offerings was papas (potatoes), most often served as french fries. Don’t even look for a broccoli spear, a string bean, or a crisp Brussel sprout. They were banned at the border.  One night I saw a rogue cauliflower on a plate with steak and potatoes and felt compelled to photograph it. 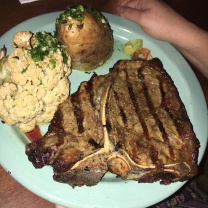 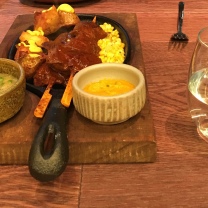 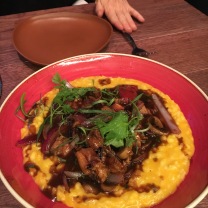 Other staples and minor players

There was no shortage of jamón y queso (ham and cheese); it was an option for everything. In fact, it was hard to avoid. If you really looked hard, you did see some vegetables here and there.  Cebollas (onions) were in everything. Spinach showed up as a flash of green in the ubiquitous empanadas (turnovers), on pizzas, and in tortas (quiches). Berenjena (eggplant), often found in their Italian food, was the star of their few vegetarian offerings and calabaza (squash) made an occasional appearance in risotto. And, there was LOTS of risotto!

If meat is your thing, this is paradise. If not, eat Italian or Peruvian. Just be sure to try the ice cream; the heladerías have top-notch gelato!

7 thoughts on “Eating Out in Buenos Aires: Where’s the veggies?”