Help! The public sphere is being flooded with TV screens that are drowning out everything else. They show up everywhere, obtrusive and unavoidable. 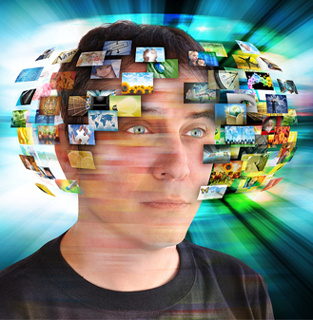 They demand attention; trying to block them out and do something else can be mentally exhausting. Whether they are large or small, whether they broadcast a public station or a closed circuit network, their continuous distraction of moving images and background noise discourages people from interacting, reading, writing, or just sitting quietly and thinking. I really dislike it.  Skip the life preserver and someone please throw me a remote!

The following list (or should I say rant) describes some of the places I’ve seen — and been bothered by — a TV screen or video display.

Restaurants.  This might be the first place they appeared in public;  today TV screens in restaurants are so ubiquitous that most people hardly notice them anymore. I don’t watch TV at home, so at first I was fascinated; now, I take them in stride.  It seems almost mandatory, like every eating establishment must have at least one behind the bar.  The more casual the atmosphere, the more TVs there are in operation, usually on different channels. On the contrary, coffee houses rarely have TV screens.  Bless them. May the universe be kind to them.

Heath clubs. Exercising must be mindless and therefore it demands constant media input. My gym is typical with a bank of TVs by the aerobic equipment and one on each wall in the weight room.  Some treadmills and elliptical trainers have a small TV screen sitting right in front of your face. For those who can’t dress and undress in silence, there is also a TV in each alcove of the locker room.  I think this might be a contributing reason for the popularity of yoga. If your yoga studio has a TV, find another one fast. 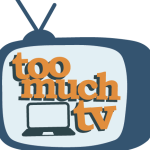 Waiting rooms.  Now you can watch TV while waiting for your dentist or doctor, in larger law or insurance offices, and in hotel lobbies and hospital emergency rooms. I suppose it fills the void for some folks. I try to sit as far from the screen as possible and, when I am the only person in the room, I’ve “shockingly” asked the attendant to mute or turn it off.  I’d rather rummage through the magazines. Sometimes I just sit and think.  Crazy, I know!  I never imagined the DMV would offer a preferable experience.

Airports.  Every gate has at least one TV, usually with a special closed circuit news station.  This is particularly irritating when you have to walk 10 gates to find a display of arrivals and departures. I was taken by surprise the first time I encountered airport TV.  I was waiting for my flight, reading my book (an old-fashioned paperback), looked up, and thought everyone was staring at me. I had a moment of panic before I realized that a big TV screen was looming above my head a few rows behind me. Like many chain restaurants, some airport food courts also feature digital ordering from an iPad-like device that then offers you video games to play, just in case you are tired of looking at your own phone apps and social media while you eat. I have yet to see TV screens in airport bathrooms. The operative word here is “yet”.

Airplanes.  So much time strapped into a tight, uncomfortable space requires entertainment. TV screens are suspended from the ceiling every few rows or built into the back of each seat, often inches from your face.  On some international flights, you are given your own personal hand-held screen.  Thankfully, you can turn them off or opt out. Unfortunately, you can’t turn off the ones that the people next to you are using.  Your neighbors’ flashing images can be a nuisance and, if their earbuds fall out while they are asleep, so can their sound track.  Yes, this has happened. Never travel without your own earplugs.

Gas stations. TV at your gas pump…because the constant music wasn’t sufficiently bothersome. I was actually frightened the first time my gas pump started shouting at me and, worse, I could not turn it off. Of all the force-fed TV I’ve encountered, I find this to have the biggest cringe-factor. One of the purveyors claims “We strive to make the weekly chore of fueling up intriguing and exciting by bringing media to life right there at the gas pump!”  I prefer to drive a little out of the way to avoid gas pump “intrigue”.

Taxi cabs.  On a recent trip to NYC, every medallion cab had a TV playing the same repetitive closed-circuit broadcast — yet another reason to consider Uber. The displays came on automatically, first showing the meter and rates, and then launching into a series of advertisements for TV shows or local venues. Note: The OFF button is in the lower right corner. Touch it and look out the window.  The world is an amazing place.

Hotel elevators.  Yes, hotel elevators.  On this same NYC trip, our hotel elevator had a TV screen. It was a first for me; I am sure it will not be the last. Thankfully it was small and not loud.  I am not sure what it was broadcasting; I refused to look. But, in a 15 floor elevator, really? Is your favorite sitcom or news show that important that you can’t spend a few minutes without it?

So what’s left? Where can you go outside your home and not be confronted with a media spectacle? The library?  Church? Funeral homes? Court?  And, where will unwelcome TV screens pop up next?  We are a capitalist society; any place that has an opportunity to grab your attention and sell you something is a candidate for a promotional program.  Media addicts need not worry. If there isn’t a broadcast being played large and loud for you, you’ve always got your phone or tablet, your own little window on the world. Meanwhile, the public sphere is becoming increasingly isolating and dissonant, less conducive to both communal interaction and quiet reflection. When it becomes impossible to converse, people-watch, concentrate on a personal task (like reading, writing, homework, crossword puzzles) or even think, all that is left to do is to sit and watch…either their screen or yours.