On day 2 of our Nile cruise we woke up in Kom Ombo and proceeded to the Graeco-Roman Temple shared by two gods: Horus, the falcon-headed god, and Sobek, the crocodile god.  Yup, a crocodile.  The ancient Egyptians worshipped Sobek as a protection from the dangerous crocodiles that once infested the area. The building has two sides,  symmetrically built with matching courts, halls, and sanctuaries.  You wouldn’t want to show favoritism! Built circa 180–47 BC and damaged by floods and earthquakes, what remains is quite impressive with lots of the carvings still intact. Every surface has some form of symbolic decoration to tell a story or honor a deity. There is an on-site museum with several of the hundreds of mummified crocodiles (!) that were discovered in the area.

While we ate lunch on the ship, it sailed to Edfu where we boarded horse-drawn carriages and were taken to the Temple of Horus, one of the youngest ( 2nd Century BC ) and therefore the best-preserved cult temple in Egypt.  Here things got really large!

Buggy ride to the temple

The gateway is massive, guarded by large statues of Horus in his falcon form. The walls are decorated with colossal reliefs and there are columns, column, columns — GIANT columns — with varying decorative capitals. This temple was the site for annual fertility celebrations and housed inner chambers with a library, a laboratory, and storage rooms for all the sacred items the rituals required.

Back at the ship

That evening we had a Galabiya party.  For this common cruise ship ritual, guests are encouraged to dress in classic Egyptian clothing (conveniently available for sale, right on board), dance, and play games that were led by an enthusiastic DJ.  The games, versions of Hot Potato and Musical Chairs, ensured that everyone came into very close contact and touched the same bottle, our “hot potato”. Cultural appropriation was not an issue here, neither was social distancing, a term that was barely on my radar. 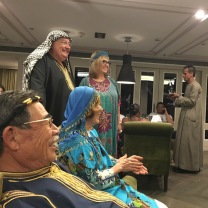 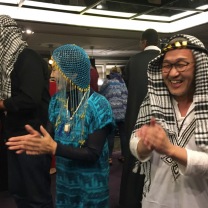 The next day we went to Esna on the west bank of the Nile to see the Valley of the Kings, famous for tombs of the pharaohs, Egypt’s ancient rulers.  What looked like just a big dusty valley has multiple (once secret) entrances that lead to underground halls and rooms. many of which have been raided and robbed.  In the service of preservation, they rotate which ones are open to tourists. We went into two.  After visiting  the temples that are open to the sky, the tombs felt intimate, a bit spooky, and yet wonderful.  Because they were never exposed to the weather, the decorations are not only as numerous but also much more vivid.

Then, for gender balance, went to across the valley to the huge temple erected as a tribute to Hatshepsut, a female pharaoh who is said to have had a mythical, divine birth. In a place where they built things very large, her temple is ENORMOUS with trolleys to take you there and back. No doubt, she was important.

The depictions inside the temple show the Egyptian gods presiding over Hatshepsut’s creation and describe the ceremonies of her coronation. In reality, she became a monarch through her male associations as the daughter, sister, and wife of a king.  Nevertheless, she is generally regarded as one of the most successful pharaohs, reigning longer than any other woman of an indigenous Egyptian dynasty.  Among the symbols, were many homages to Isis and depictions of women with their fascinating clothing, headdresses, tattoos, and jewelry.

Offerings to the god 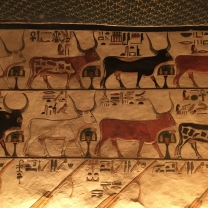 Check out this skirt

There was still more to see!  After lunch on the ship, we went to the East Bank of the Nile to another massive complex with the Karnak and Luxor Temples.  Karnak has massive statuary and a commanding approach lined with sphinxes. Luxor has a tall obelisk and gigantic columns. It all seemed more magical as the sun moved toward the horizon and evening approached.

Luxor lights up at sunset 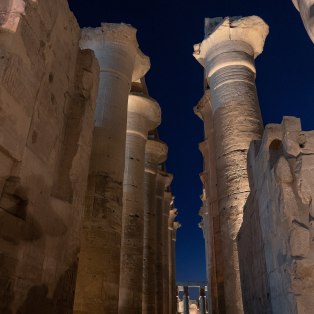 On our last night aboard, our ship went through the locks of Esna.  Another first for me.  It’s a standard process:  the ship pulls into a lock; the lock closes and fills with water; the ship gradually rises to the next level and then pulls out.  Another wonder of human engineering, it’s slow and rhythmic.  On a balmy night in Egypt on the Nile River….I loved it.

Wait, there’s more! The next day we will fly back to Cairo. We had yet to see some of the most iconic monuments —the Great Pyramids and Sphinx in Giza — plus the National Egyptian Museum. Other stops on the itinerary include several religious sites and a sprawling shopping bazaar.

Coming soon: Touring Egypt on the Verge of a Pandemic: Part 3

2 thoughts on “Touring Egypt on the Verge of a Pandemic: Part 2”