The Maasai Mara National Reserve is the ancestral pastoral home of the Maasai tribe, with open grasslands favored by large cats — lions, cheetahs, leopards — and dotted with trees.   As we drove into the park from the Wilson airport, the very first thing we saw was a leopard in a tree with its impala dinner hanging in the limbs below.  And, we weren’t even on a game drive yet!

The Ashnil Mara camp was rated 5 stars so we had big expectations. We had reserved a 3-person “luxury” tent but found it WAY too small and cramped for that many beds and people. There really was no room to unpack our luggage.  We emailed our travel agent and the next day we were moved into a much bigger tent, more like a two-bedroom, two-bath suite with canvas walls.  They made it right and we once again became “happy glampers”. 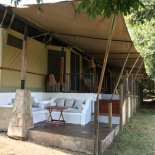 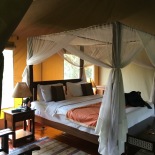 Single bed on one side 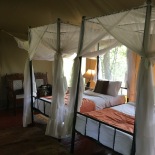 Two beds on the other

Lots of room all around

The camp itself was more crowded than Satao Elerai and had buffet-style dining, which was less elegant but better for the many families that were there. They had a wide variety of choices at every meal with many Indian dishes.  One evening, a group of Maasai men came to entertain us with their signing, dancing and jumping (a special skill). 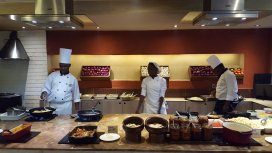 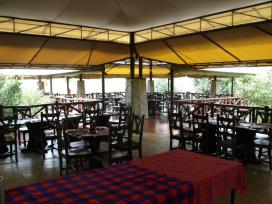 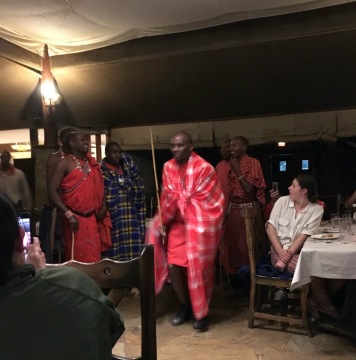 The great migration…sort of
The Mara River separates Tanzania’s Serengeti National Park and the Maasai Mara National Reserve. Each year close to two million wildebeest, zebra, and other antelope — young and old — make this dangerous crossing in search of greener pastures.  Adding to the drama, the predators come to take advantage of this abundance of tired, stressed prey.

Because there had been a lot of rain, this annual migration began early. Many animals came, risking their lives … and then, strangely, some went back.  We did not get to witness the wild stampedes but we still saw much larger herds than before.  At the river,  we noticed the markings where they had scrambled up the banks. We also spotted our first hippos and crocodiles (not photogenic), warily and at a safe distance. 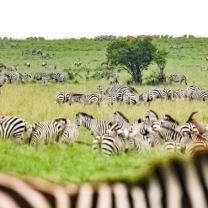 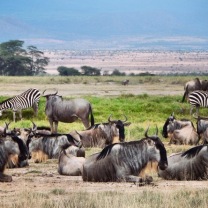 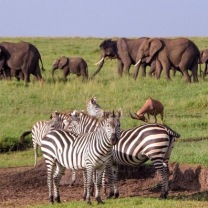 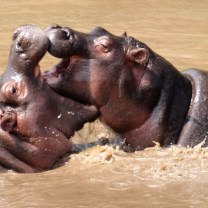 Another Maasai boma
We made a second visit to a Maasai boma, danced with the women, saw a fire-making demonstration, and went inside the chief’s own home. This community was a bit more “modern”. They had doors on their huts and the women sold their jewelry from tables in a circular open-sided structure (their store) rather than from blankets spread on the grass.

With the chief’s son 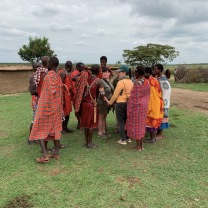 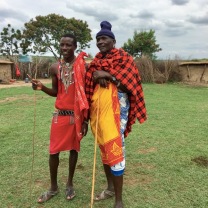 The chief and his son

A Maasai village center
After one of our game drives, our guide took us to a local town center to pick up some car parts. After staying in camps that cater to mostly affluent, western tourists, it was a colorful and eye-opening experience.  This is where people get their essentials, liquor, hardware, and maybe socialize at the Hard Rock Cafe.  Most  Maasai don’t own cars; they walk, use motor bikes, or hire rides.