Naples, which was the last stop on our recent European adventure, has a reputation for being many unsavory things: from noisy and chaotic to dirty and dangerous. My BF and I had been to the area before to tour the ancient sites at Pompeii and Herculeum but we stayed a few miles away in Sant-Antonio Abate. This time we were intent on seeing the National Archeological Museum.  We found a charming B&B with an advertised “excellent location” right nearby.  Our 2-day experience was filled with paradoxical surprises, from the sacred to the profane.

We arrived at night, picked up a cab at the airport, and gave the driver the address of our rental, called the Lemon House.  As we got close, he became very skeptical. It was not an inviting scene — a narrow street of apartments, seedy-looking in the dark. From his car, we couldn’t read the numbers on the doors.

He didn’t think it was the right address, refusing to believe a decent B&B would be in this location. With our safety in mind, he pulled into an alley and phoned his office to check. They verified that the address was correct but he still felt uncomfortable. My BF got out of the car, walked back along the littered sidewalk, and found the number and nameplate outside the door. He knocked, the door opened, and a kind gentleman and his son greeted him. It was as sweet inside as the pictures we saw on the web.  We thanked our kind driver and sent him on his way still shaking his head.

The next morning, we ventured out to Piazza Dante and the Archeological Museum. Our street looked much friendlier in the daylight; what seemed frightening at night was just gritty by day. The city seemed to be having a general trash problem and we might be the only people who noticed it. Beyond that, it was colorful and lively…reminded me of the streets of Greenwich Village, NYC in the morning, perhaps proving that “you can’t take the city out of the girl”.

Piazza Dante is a big, busy intersection with lots of noise, traffic, and activity but entering the museum is like walking into another world — quiet, elegant, magical.  And then, there is the art. Wow! The artifacts from the two “scavi” were transported here, a miraculous feat in itself. The huge mosaics, brought from Pompeii and re-assembled, were mind-boggling.

The statuary from the Farnese collection was impressive. Homage to the gods and emperors was in abundance, glorious but expected.  All hail to Caesar…and others. 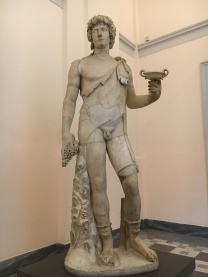 The many goddesses were the bonus. The outlier, a 2nd century AD Roman statue of Artemis of Ephesus, was dark-skinned and displaying fecundity in a very obvious way. 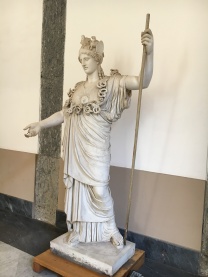 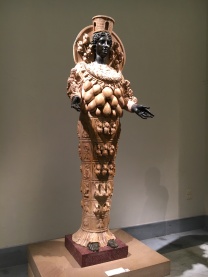 On day 2 we braved Naples Underground  known in the area as Napoli Sotterranea. This is not the subway, a political movement, nor a rock band.  It is an actual series of tunnels and caves more than 100 feet below Naples that date back 2400 years. We went on the group tour, walking down a long series of stone steps and through narrow passages, at times carrying candles to light the way. Eerie and mysterious, it gives you a true historic perspective on this complex city. The volcanic stone, called tufa, was originally excavated to create aqueducts for the city’s water supply and brought to the surface as the main building material.  Over the years, the series of catacombs included places of worship, tombs to bury the dead, a large cistern dating back to the 2nd century A.D., and bomb shelters during WWII.

Back in the delightful disorder of the ‘hood, we had no trouble finding good food.  You don’t need a 5-star “ristorante” to “mangia bene”.  We had Neopolitan pizza (of course) with thin crispy crust, tomatoes, mozzarella cheese, and basil.  And pasta and pastries…everything fresh and delicious. It’s Italy! You wouldn’t expect less. 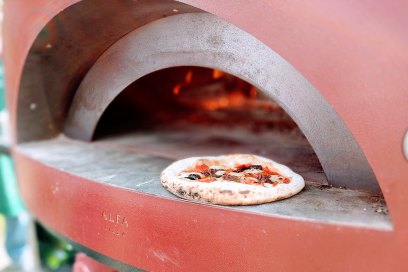 4 thoughts on “Naples: The Sacred and the Profane”